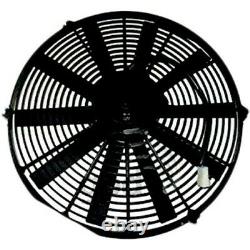 2811727 GPD Cooling Fan Assembly New for Chrysler 300 Dodge Charger Challenger. GPD Cooling Fan is made to meet or surpass the strict requirements of the automakers. This Cooling Fan is built using only high quality materials and above the standards components available in the market today. With GPD's tough standards to quality, you are assured the this Cooling Fan is made to function better and last longer. (GPD) has been a known supplier of AC parts in the automotive market for many years. The brand carries a complete line of AC products that are guaranteed to last longer, function just like your old AC parts, and perfectly fit to your own vehicle. From late model vehicles to the heavy duty applications, GPD is the brand you can depend on. GPD also takes responsibility in providing their customers with unequaled support and services. The company works very hard to supply every information and tools needed in today's market. With dependability, functionality, and quality in mind, GPD is the most reliable air conditioning suppliers in the industry today.